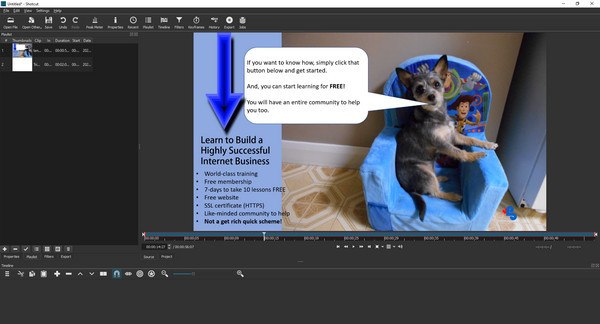 In searching for a reliable video editing software, I came across several options, many were well beyond my needs, as well as being beyond my acceptable price range.

This post was due to be published on the 15th of April.
Due to the urgency of helping teachers everywhere due to the Coronavirus (COVID-19) outbreak and their need for taking to teaching online, I am releasing this information now.

One of my previously recorded videos had to have a few frames removed, while a second video had to have an audio file merged with the video file in order to add the audio portion.

During my first effort in searching for a video editor software, reading through other’s reviews, it looked like ApowerEdit was the best option. So, I downloaded and installed it, and then discovered that if I wanted to use it, I had to pay for it.

However, I was a few weeks getting to use this software as other issues took my immediate attention away from these videos.

Later, upon trying to create the necessary edit in the one video, the output was so pathetically low-quality that I could not use it. I then realized that ApowerEdit video editing software was not what it was professed to be.

Not only was the video output too small in overall size, but the video was also blurry when viewed.

My task got put on hold once again, especially knowing I would need to find yet another video editing software.

On 15th of March 2020, after seeking yet another review done on video editing software, I purchased yet another software. This time the one I chose was called VSDC Video Editing Pro, and thankfully it only cost me $27.70 Canadian funds ($19.99 US funds).

But once again, the video output was far of too low a quality to even contemplate using.

The video that needed editing was created back in 2017, using a PowerPoint slideshow that was created in PowerPoint 2007, with a WAV file embedded in the Transitions under Sounds.

Back then, I used WonderShare PPT2 Video Pro to turn the PowerPoint file I had created into a high-quality video, and it worked perfectly.

And back then, I created two videos using this method and BOTH videos were of exceptional quality. I am only disappointed that WonderShare PPT2 Video Pro is no longer available for Windows 10, and the developer has discontinued their software.

Am guessing their discontinuance of such awesome software could be due to Microsoft’s claim that you can now automatically create a video from your PowerPoint slideshows.

When adding a WAV file to the Transitions > Sound option in my Windows 10 version of PowerPoint 365 and exporting it as a video, PowerPoint refused to include the audio file, no matter what I tried in order to have the audio included in my video exported.

Tried adding the audio as an MP3 file to, thinking perhaps that was the problem, but alas that didn’t matter, as the audio file STILL was not included in the exported video from PowerPoint 365.

Even tried Microsoft’s instructions provided here for inserting music in the background, and my audio file played PERFECTLY during the slideshow… well, until the end.

And yes, even though I made sure to UNSELECT loop until stopped as directed in their video instructions, my WAV file looped all through the credits that I intended to be displayed WITHOUT audio.

So, neither of Microsoft’s instructions worked for me.

Though, PowerPoint 365 DID create a HD video of the slideshow. Armed with this great HD video and my audio file… this made it necessary for me to use a video editor software in order to merge the two files properly.

Don’t misunderstand me. I Google searched for several hours, and even watched not only Microsoft’s instructions on adding audio to my PowerPoint created video, but NOTHING worked for me.

After being told by the Microsoft experts that they could not help me with this problem, I decided to think about this issue overnight, and then see if I could come up with a better query for Google, all in hope of finding a superior video editing software to use.

My projects HAD to be completed really soon, so I was now pushing myself for an answer.

I finally figured out a better query, which was: HD video editor software (HD meaning high definition) …and that is when I FINALLY found a great review on several video editors… one of which was Shotcut.

Plus, I discovered that Shotcut is FREE to download AND use… YIPEEE!

After spending over $100 Canadian funds in hope of a resolution, I finally found a software that was not only FREE to use, it even comes with a whole mess of tutorials too.

Need I say that within minutes of downloading, installing and taking a quick viewing of their very first tutorial video, I was able to add my WAV file to my PowerPoint HD video, and Shotcut created a high definition video for me, WITH audio… and I was able to then upload it to my YouTube Channel in a very short period of time.

That’s when I decided to try editing the other video, and found that Shotcut was soooo easy to work with that I was able to precisely edit out not only the frames but also the audio, to the point that no one would ever even know those other frames ever existed.

Suffice it to say that I recommend Shotcut and will be shouting my recommendation all over social media as my way of thanking the developers of Shotcut for making my life a lot easier and not even charging me for doing so.

Today, I sent my PowerPoint slideshow with the audio WAV file to my IT fella, making sure that the WAV file was inserted in Sounds under Transitions, and had him test to see if using his version of PowerPoint on his Windows 10 computer that has NEVER had Windows 7 installed on it (one person suggested that might have been the issue), and his output was EXACTLY the same as mine… no audio was included in the video his PowerPoint created, yet he could play the audio in his PowerPoint slideshow.

He even tried inserting the WAV file and exporting the video that way, but the timing of the audio was too far off of the slides and he stopped and deleted that file too. I told him that my slideshow kept looping the audio through the credits at the end of the file, even though I had NOT check marked loop until stopped.

Am beginning to think this is a failure with Microsoft’s PowerPoint, but thanks to Shotcut, we now have a fix.

This announcement is for ALL TEACHERS… The online classroom designed for teaching, tutoring & training website stated the following: “To assist teachers, schools & organizations experiencing closures due to the coronavirus we have extended our free plan.”

PLEASE UNDERSTAND: This is NOT a recommendation, just another option you can consider using. I found this site searching for better methods for teachers to use in order to provide a wider range of options to you.

A Proven Method for Creating Quality Content – Only 4 Steps

Fix Windows 10 Not Responding Locking Up Computer [SOLVED] – No Need to Download Anything!

How to Rank Your Local Business for Cities Near You

Website Designer for Parr's Publishing. As a full certified Internet Specialist, I help business owners and organizations increase their profits by providing them with a fully managed, custom designed website as well as basic Search Engine Optimization.